Mr. Colion Noir: One of My New Favorite People 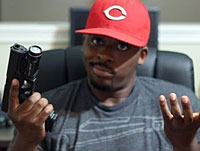 If, like me, you’ve been following the insanity unfold in the form of the latest gun control debate in America, then you probably often feel nauseous, angry and even like kicking something when you watch or read many of the ridiculous theories on curbing gun violence by enacting more gun laws. If that’s the case, then I would like to introduce to one of my new favorite people: Colion Noir. “Who is Colion Noir?” you ask. Well, to be honest, I personally don’t know anything about him. What I do know is that he is a gun enthusiast, he’s smart, well spoken and he makes some excellent videos that are short and to-the-point on the subject of firearms and the gun control debate.

I first stumbled on one of Colion Noir’s videos after Obama released his 23 orders to curb control. Colioin Noir had this to say about how to stop mass shootings:

I was so impressed with how well spoken and flat out practical Mr. Colion Noir made his case in this video. But, I didn’t take the time to look at any other of his videos at that time. However, today on the Blaze, I read this article about someone who will be a new contributor to the  NRA. see the video below:

I don’t know about you, but I like this guy – A LOT. I am now a very big fan of Colion Noir and I hope we see and hear much more from him as the debate rages on. This guy knows what he’s talking about and is passionate it about. Smart move NRA. I really hope this combination will bring some logical and rational discussion to the table on the gun control debate.

I’ve now spent way too much time watching Colion Noir’s videos and I’ve decided to create a category just for him on this site. I’ll be posting his videos now and then in the new Colion Noir channel.

Mar 1, 2013S. Lawrence
The Virtual President of the United States on Gun ControlThe Truth About A High Capacity Magazine Ban