WWI Color Photos – A New Perspective on the Great War

I had a conversation not too long ago with my brother regarding a program on the History Channel called “World War II in Color”. Coming from the perspective that most, if not all, of the photos and films used to teach WWII over the years have always been in black in white, my brother felt color images from the war just didn’t seem real to him. Imagine how surprised he will be when I tell him there are WWI color photos now coming out. 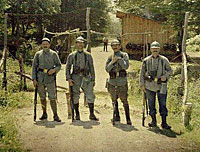 That’s right, World War I in color. Hard to believe isn’t it? I didn’t even know color film was available then, but that is something else new that I learned. Recently I discovered a website that was developed to display WWI color photos that goes by a simple yet obvious name: World War I Color Photos. This site was put together by a few WWI hobbyists/historians who had found the color photos in a museum in France. It turns out most of the WWI color photos were taken by the French army at the time but not made public until quite some time later.

While being an avid student of history, specifically, the second world war, until recently watching a documentary on 20th century wars, I knew very little about the conflict known as “The Great War”. Unlike WWII when Allied soldiers were battling madmen who were systematically conquering Europe and the Pacific, in WWI very few of the soldiers buried in mud across France really knew why they were fighting at all.

A Bit About the “Great War” 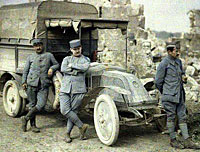 French Soldiers by a Car

I won’t make this post a history lesson on the causes of World War I. That’s too much of a topic for me to handle here. I will, however, offer a brief explanation of what caused the first global conflict in human history. It really all came down to alliances and promises that were made from one nation to another. In a part of the world that many people then – or even today – know much about, a young Serbian student assassinated the heir to the throne of the Austria-Hungarian empire. Due to his actions, war between Serbia and Austria-Hungary erupted rather quickly.

This could have stayed a local and short-lived conflict but many treaties of the time would not allow that to be. Prior to the threat of war, Britain and France had sworn allegiance to Serbia while Germany and others committed to defend Austria-Hungary. So, it wasn’t long before a dozen nations got involved and declared that their cause – and their armies – to be superior to that of their foes. As such, each nation then gathered itself for a war that not one of them could have possibly fathomed. 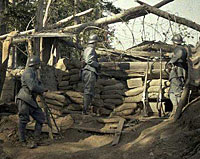 One of the aspects of this conflict that fascinates me so much was the complete confidence (and ignorance) each side displayed in how quickly and decisively they expected to be victorious. As the armies gathered in the summer of 1914, they paraded through the streets to cheers and praise all expecting to be home by Christmas. But, after just a few months of advancements a stalemate ensued that allowed neither side to make any significant gains over a desolate and dismal landscape. It wouldn’t be, in fact, until five Christmases had passed before the dismay and death of Word War I would finally come to an end.

What started as a simple conflict between two relatively small nations turned into a global war that stretched from the Atlantic to the Pacific and devastated much of central Europe. In all, over 9 million soldiers would die in the conflict while civilian deaths – due to the war itself or the direct result of it – totaled over 16 million. So by calling it the Great War, “great” was not intended to mean “more than good”. Rather it was thought that such a devastating conflict was to be the “War to End All Wars”. What a nice thought that was. If only the signers of the treaty that ended WWI had remembered Edmund Burke’s dire warning that “Those who don’t know history are destined to repeat it.”

If you don’t know much about World War I, the History Channel has some great material on the subject. And if the link above to see WWI color photos isn’t enough for you, enjoy this little clip from the BBC with aerial footage of the Great War. It really offers a new perspective on this conflict.

Feb 10, 2013S. Lawrence
Taking the Emotion Out of the Second Amendment DebateThe Virtual President of the United States on Gun Control
Comments: 1