How Sons of Guns Season 4 Ruined a Great Show

When Sons of Guns debuted in 2011 on the Discovery Channel, it was a unique reality show for sure. In fact. one of my earliest posts on this website was a gushing article I wrote detailing how different and uniquely special Sons of Guns was. When I wrote my first article about the show, Sons of Guns was in its 16 episode-packed third season, and it was at its best. Season 3 featured an episode with rocker Joe Perry, an avalanche gun, zombie guns and the gun that killed Bin Laden. The show was on a roll and more entertaining than ever.

At the time I wrote that first article, one of the reasons I stated that I loved the show so much is that, unlike so many other “reality” shows, Sons of Guns never seemed to focus on the petty parts of reality. On camera, we rarely saw any back-biting, complaining or the crappy made-up drama you see on so many other shows. I know, there were times when Will’s temper flared, or someone didn’t like what someone else said or did, but overall, Sons of Guns was about guns. It was also about traditions, family, and country, but mostly guns. We got to see sketches, planning, smithing and welding. Best of all, we got to see firearms shoot and stuff get blown up. The show was entertaining, educational and fun.

Things started to change, though, in the final two episodes of that season. Those episodes seemed to set the stage for what would be a disastrous Sons of Guns season 4. If you watched it, you know about Vince’s resentment getting the best of him as he walked out on the team. I don’t want to debate who the bigger jerk is, Will or Vince. Let’s face it, producers wanted us to see what they wanted us to see: a bitter personal battle between individuals who seemed to – at one time – respect and care about each other. But these couple episodes of Sons of Guns were different. This was the first time since I started watching that the show actually made me feel uneasy and thoroughly un-entertained. 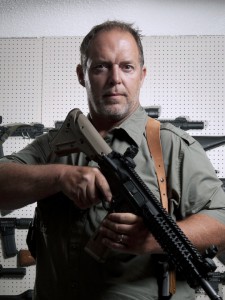 So, season 3 had a “cliff-hanger”: what was Vince going to do? Moreover, what were the producers going to do? What direction would Sons of Guns season 4 go? They could have turned the page on the Vince drama and left that out of the show. They could have gone back to the successful formula of seasons 1 through 3 and given us an entertaining and drama-free season 4. But instead, for whatever reason, Executive Producer Delores Gavin seemed to think that making Sons of Guns more like the Real Housewives of Beverly Hills was going to help improve the ratings. Well, Ms. Gavin, that was a bad move.

If you watched Sons of Guns season 4 (and honestly, I almost didn’t finish it), you saw Sons of Guns become a show full of complainers, egos, attitudes, betrayals and everything else you’d expect on some ABC crap show like Scandal, than what we came to know as a show about guns and the people who make them. Season 4 not only didn’t move passed the Vince drama, it double-downed on it. Add in to that a mix of an uncommitted Flem, a whiny foul-mouthed punk, Will and Steph wanting to “do their own thing” with Will and Joe left holding the bag. That bag, in the end, became a steamy bag of crap.

After the mass murder tragedies last year, maybe Ms. Gavin and Discovery wanted to make a mockery of a show about guns. I don’t know. I do know that Sons of Guns season 4 was nothing that I expected or recognized. What was a smart, fun and entertaining show became a southern-flavored soap opera. I don’t know if there is a season 5 coming or not. If there is, I hope they get back to guns, family, loyalty and country and leave out the ridiculous drama. Otherwise, Sons of Guns will be off my DVR list and will be DOA to its most devoted fans.

Agree? Disagree? Let us know in the comments below.

After watching just two full episodes – and part of episode 3 – of season 5, I’ve officially given up on Sons of Guns. From most of the comments below, I see I’m not the only one. I tend to be an optimistic guy, so I’m going to choose to believe that most of the garbage that is going on at Red Jacket is not those people’s true behavior but just dramatized for some moronic producer who thinks fans of the show would want to see that. I want to believe that Chris and Steph are not that rude, selfish and stupid. But, for me, it’s over. The show was about a gunshop and the unique things they do there. It now belongs on whatever networks carries the Real Housewives shows and the Jersey Shore garbage. I’m officially done with the show and disappointed in Discovery for letting a good show and good people go to waste. RIP SOG.