Hollywood is in an uproar. CNN anchors are losing their minds. The left is literally going ballistic. Why? Trump’s immigration executive order.

Where did the list of seven countries come from? Those countries were identified by the Obama administration as being “sources of terror”. While no U.S. terrorist attack has been knowingly carried out by citizens from those countries, all seven have thriving terrorist networks and in some cases the governments of those nations openly support terrorist organizations. 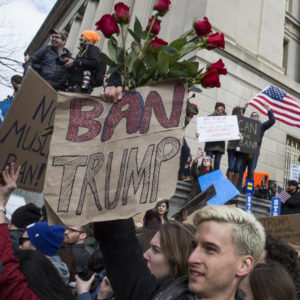 Why are liberals so upset about it? First, they are uninformed. They know very little about the ban, what it really means, how long it will last or why President Trump is really doing it. Second, they are liberals so they will be upset by anything that comes out of a Republican White House. Third, they hate Trump and believe he is a racist (back to point #1) so this “rightfully” gives them cause to cry, scream and denounce it.

My question is, though, why the hell is this such a bad thing? First of all, this is not a permanent ban, it’s temporary. A permanent ban might be reason for accusations of bigotry and close-mindedness. But, it’s temporary so why all the fuss? Second, OK, all seven countries on the list are predominantly Muslim or ruled by Muslim theocracies. There are, however, 40 other predominantly Muslim nations that are not banned. Also, let’s look at the most recent mass casualty terror attacks in Europe since 2015:

Color me crazy but isn’t there a pattern here? If that was evidence enough, ISIS has admitted to using refugees and the refugee crisis as a way of getting radical Islamic terrorists into the West. To me, it would seem then that  legislation such as Trump’s immigration executive order is not only practical but also prudent. Actually, I’ll take that a step further, Trump’s immigration executive order is necessary to protect innocent people.

To those out there who call me a bigot and a racist because of my opinion on this matter, let me ask you this: If crime is on the rise in your neighborhood, do you lock the door at night or do you leave it open? Be reasonable. The United States of America is my home. I do not want an open door to my home to let anyone in without knowing something about them. If that makes me a bigot, than sobeit. For those who will call me such, I invite you to open your door to any and all who wish to enter. Tell me how that works out for you.

5 years ago 2 Comments In the News, TerrorismHollywood, in the news, media, politics, terror, tragedy, Trump612