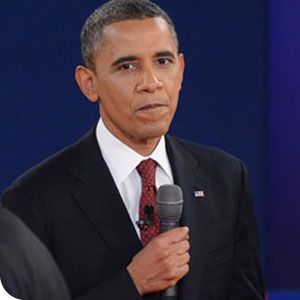 I probably shouldn’t get too political here. But, anyone who enjoys firearms in any fashion has some interest in this year’s presidential election. So, I guess you can’t fault a gun lover like me for putting in my two cents.

In the last of the presidential debates held on October 22, Mitt Romney charged the Obama administration of cutting our Military based on an act championed by Obama that will reduce the size of the U.S. Navy and other forces. Romney claimed that after those defense cuts, the U.S. Navy would have fewer ships then in 1916 – prior to World War I.

Quite sarcastically, the president responded, “I think Mr. Romney hasn’t spent enough time looking at how the military works. You mentioned the Navy, for example, and that we have fewer ships than we did in 1916,” Obama said. “Well, Governor, we also have fewer horses and bayonets, because the nature of our military’s changed.”

He went on, condescendingly, “We have these things called aircraft carriers where planes land on them. We have these ships that go underwater – nuclear submarines. And so the question is not a game of Battleship where we’re counting ships, it’s what are our capabilities.”

When addressing Governor Romney, the president’s condescending and rude tone, suggested his challenger knows little of our modern military. However, his very words betray him.

In 1916, the U.S. Army was roughly 140,000 men strong, although I suppose you could argue that coupled with the Marine Corps, the number might have been closer to 250,000 total troops armed with standard issue Springfields with bayonets. Clearly President Obama believes bayonets have gone the way of revolvers and horse-drawn artillery in terms of relevancy on the modern battlefield  And, he is the Commander in Chief so he should know, right? Truth be told, he couldn’t be more wrong.

The reality is, every member of the U.S. army infantry and every U.S. Marine is issued one of two standard-issue bayonets: either the older M7 or latest Marine-issued M9. While doubling as a utility and combat knife, these blades are affixed to the front of the standard-issue M4 assault rifle (or similar) for every U.S. soldier. How many is that? Roughly over 750,000. Definitely not LESS than there were in 1916.

Now, I know people might argue, “he meant the old bayonets” or “is the number really relevant?” To that, I argue two simple points:

First – the president said “we have fewer horses and bayonets”. Fact: he’s wrong. You can’t infer that he meant a previous version of the weapon. He said bayonet and while the design has changed, the term is still used. So, my point is valid.

Second: Because he was arguing numbers based on Romeny’s comment, the numbers absolutely DO matter.

Oct 23, 2012S. Lawrence
The Redskins Rule and NFL Predictions on the Presidential ElectionTragedy in Newtown - Guns Not to Blame
Comments: 1