Experiencing World War II – From Someone Who Lived It 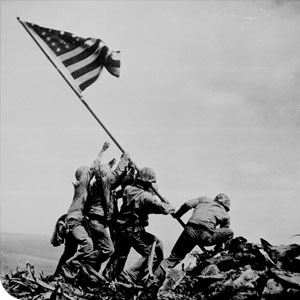 I’ll admit that when I was a kid and even as a teenager, I had little use for book learning and just didn’t care for school all that much. Being a slow reader, I found studying and reading cumbersome and boring. I detested school so much I now often surprise myself at how much I actually retained – from Lady Macbeth’s “out damn spots” monologue to E=mc2. My wife, in fact, often calls me a “fountain of useless knowledge”. There was no subject I found more pointless in school than social studies and history. My rants about history class often included things like, “it’s history, it’s over, why do we need to read about it?” Oh how things change.

I’m probably not alone in learning the importance and benefits of education, reading and history after my adolescence. In fact I hope many people, like me, take to educating themselves on anything and everything from classic literature to math to history. Personally, I didn’t appreciate the study of history until 11th grade thanks to a short, tough yet sweet Catholic school teacher named Mrs. McGraw. Even to this day I can’t exactly put my finger on how or why this diminuative, no-nonsense woman with a southern draw got me to not only pay attention to the subject material, but to actually enjoy learning about it. We were studying American history which I’m sure helped a little bit with my level of interest. After all, it’s hard to get a kid excited about ancient history or Roman history which happened so long ago and seemed so pointless to the life I was living. In her class we looked back at America in the 20th century. This seemed more relavant, I suppose, and somehow Mrs. McGraw turned a kid who yawned at the mere mention of “history” into a knowledge-thirsty student of any and all history. The proof of that is on my DVR – it’s 80% programs from the History Channel and the newer H2.

Being the son of a World War II vet helped to fuel my desire to learn more about that great conflict and, in fact, all of America’s military engagements throughout her brief history. My father was one of the many young men who signed up to battle Nazi’s and Imperial Japan while still a teenager. Like many of his peers – and even his older brother – my dad signed up to serve on his 18th birthday. For my father, that was July 17, 1945. My dad was lucky, however, as the A-Bombs were being dropped while he was still in basic training in Biloxi. While he would become a decorated marksman, my father never had to fire at an enemy soldier – unlike so many of his generation. Indeed, unlike his own brother who shared stories of the buzz bombs above southern England that terrified the nation for the better part of four years. So many young men fought and died for so noble a cause as liberty and to stop the spread of tyranny. World War II may seem like ancient history to some but for people like me, it was my Dad’s war. For the veterans of the conflict who still walk, limp or roll about in our towns and streets the Second World War is still fresh with memories, heartache and triumph.

This month being the 70th anniversary of the D-Day invasion of France by the Allies, The History Channel and H2 are chock full of programs on World War II. As an enthusiast on the subject, I’ve watched many of them. Some programs reinforce the knowledge I’ve gained while others teach me new things about the war and those who orchestrated it. If you haven’t seen it, I highly recommend The World Wars – The Extended Edition produced by the History Channel. It offers incredible insight into the key players of both The Great War and the war that followed it. While watching such programs can be educational and insightful, no movie, book or television series can possibly make the war more real than talking to someone who lived it.

For me yesterday was a normal day with a typical trip to the bank. I had work, family and life on my mind. I stood at the counter making a deposit. Next to me was an elderly gentlman who the tellers made a point to say hello to. “How are you today, William?” the teller handling my deposit asked. “Pretty muggy, huh?” she continued. “Eh, you just keep walking through it” William replied. I smiled at him and walked off. After pausing to look over my receipt, William came up behind me at the door. I opened it for him, to which he said, “thanks,” while using his cane to keep balance. He wore a baseball cap  and although I couldn’t make out what it said as we walked to the parking lot, I thought I made out the word “veteran” and asked him if he was one. “I was a P.O.W.” he replied just as a I reached out my hand to shake his. I said “Thank you for your service to our country,” but his words literally stopped me in my tracks.

Over the last few years, I’ve taken every opportunity I can to thank vets and active service members when I encounter them. I began this practice sometime after having the honor of visiting Pearl Harbor with my wife in 2003. She and I had the added privilige of getting the V.I.P. tour on the Admiral’s yacht thanks to a friend of ours who was stationed there at the time. Ken was in uniform when he, his wife and their daughters accompanied us on our visit to one of World War II’s most recognized memorials – the USS Arizona. There, people from many nations gazed upon the once mighty battleship just a few feet below the water’s surface. I remember feeling both intensely proud yet completely sad at that exact moment. For all that the United States and her allies accomplished during the war there were also so many lives lost. Those emotions momentarily overwhelmed me. As I was marveling at the sunken warship beneath me and thought of the bodies still inside, I noticed our friend Ken posing for pictures with tourists. In his Navy uniform, he was like a rockstar. It was then that I gained a higher admiration for him and all those who have ever worn the Stars and Stripes on their shoulder. They aren’t rockstars – they are actually so much more.

As William and I stood outside the bank a pickup slowed through the parking lot and both inhabitants yelled out, “hey Bill, how ya doin?” He waved back as I got the feeling this former soldier may be a bit of a star right here in my own neighborhood. I asked about his internment and he told me that he was in the Battle of the Bulge. That was the winter of 1944-45 and the last surge Hitler’s Nazi troops were able to muster before crumbling to the Allies by the following spring. I told William about my father and his good fortune of not having to ever leave our country’s shores. He agreed that my father was a lucky man unlike so many of the men he stood side by side with. William mentioned how the Nazi’s surrounded his battalion and they were forced to surrender. He didn’t mention details, but I surmised he spent the next six months or so in a German gulag. I honestly marveled at the man as he stood before me. For weeks now I’ve been watching World War II history on television. But this man IS World War II history.

We only talked for a few minutes. I never got his last name. I wish I had. In hindsight I would love the opportunity to interview him about his experiences. He mentioned that he is or was part of an oral history group talking to new generations about the war and other events since. Told by the people that lived it to people who either never heard about it or only read about it in school. I thanked him for that, too. He and I agreed that events as big as a world war are better remembered when told by the ones who lived through it. He told me a boy asked him once, “how do we honor those of you who fought for us?” He looked me in the eye and said, “I told him that after the war, the day I turned 21 in 1947 I registered to vote and I have voted in every general election since 1970. You want to make a difference, vote.”

I told my wife when I got home how I honestly felt my day – and my mindset – profoundly changed that afternoon. While I admitted that I could be being a bit melodramatic, honestly meeting William had an impact on me. I won’t watch another WWII documentary without thinking about him. The last thing he said to me was probably the thing that affected me most, “you tell your father ‘thank you’ for me,” he said. A lump swelled in my throat and my eyes got blurry. Here was a man who had his life on the line – who stared down Panzer’s and Nazi rifles. A man who was locked up in a German P.O.W. camp – and he wanted to thank my father for serving.

I doubt I’ll ever see William again. If I do, I’ll thank him again. Not just for serving but for living out all he served for – even 70 years later. William, my father and those they served with are often referred to as the Greatest Generation. William reminded me of why: they were, and are, people who understood sacrifice, honor, patriotism, service and respect. They are not the Greatest Generation because they won the war – but because they knew what they fought for and respected what it was they defended. I think that we would all be a little bit better people for appreciating that.