The Reality of an Assault Weapons Ban

On Wednesday, January 16, President Obama released a list of 23 Executive Orders geared at curbing gun violence. In reality, the majority of these orders will do nothing to curb gun violence in America simply because they do not target the root issues of gun violence. However, Mr. Obama additionally called for an “assault weapons ban” and a ban on “high capacity magazines”. The problem is, by calling for such bans, the president clearly does not know (a) the definition of assault weapons or, (b) existing laws that prohibit assault weapons.

Here’s the problem with the “assault weapons ban”: in reality they are already illegal for civilians to own in the United States.

What? That’s not true! The kid in Sandy Hook used an assault weapon! Didn’t he? Well, to answer that we have to look at the facts and, unfortunately, some misleading verbiage that has been included in the most recent gun debate. Let’s look at the first term in question: “assault weapon”.

What is an “assault weapon” exactly? According to Bruce H. Kobayashi and Joseph E. Olson, writing in the Stanford Law and Policy Review:

“Prior to 1989, the term “assault weapon” did not exist in the lexicon of firearms. It is a political term, developed by anti-gun publicists to expand the category of ‘assault rifles’.”

But wait, isn’t an “assault weapon” the same thing as an “assault rifle”? Actually, no they are not. And that is the second term we will take a look at: the assault rifle.

What, exactly, is an “assault rifle”? You can Google it if you want. I did and I found that Google defines an assault rifle as a “rapid-fire, magazine-fed automatic rifle designed for infantry use.” Now, I don’t know what authority Google has to define this, so let’s go further with Merriam Webster’s version which adds that assault rifles can “switch between semiautomatic and fully automatic fire”. It’s important to note the one crucial word included in both definitions: automatic. Automatic means that with one trigger pull, multiple rounds are fired. With an automatic rifle you could, conceivably, empty an entire magazine with a single trigger pull. This attribute also puts these types of rifles in the category of “machine guns”.

If you know anything about mobster history, you’re probably familiar with Bonny and Clyde and their infamous Tommy Guns. A Tommy gun (or Thompson sub-machine gun) is a compact fully automatic rifle – i.e. a machine gun. Due to the violence of the gang wars of the 1930’s and the prolific use of guns like these at that time, Congress passed the National Firearms Act in 1934. This law made the sale of fully automatic weapons illegal in the United States.

So if fully automatic rifles, or assault rifles by definition, are already illegal, what were these guns used at Sandy Hook and in the Colorado theater? Let’s look into that.

The Truth About Legal Firearms

One model of firearm used in both the Newtown and Aurura killings was reported to be a .223 caliber civilian sporting rifle. This particular rifle is a semiautomatic rifle. What does “semiautomatic” mean? Well, for starters, it doesn’t mean “automatic”. Semiautomatic means that with a single trigger pull, one bullet is fired, the case from that round is ejected, and a new round is loaded into the firing chamber. It does NOT mean multiple rounds are fired. That is a complete misconception. In reality, with a semiautomatic rifle – like the ones used in those tragedies – the killers had to pull the trigger for EVERY round that was fired. It’s simple, one trigger pull = one bullet. 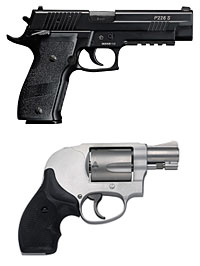 This is how the majority of firearms function. If you pull the trigger once, you fire one bullet. To fire another round, you simply pull the trigger again. Just about every handgun, like the two pictured to the right, function this way. Both semiautomatic pistols and double-action revolvers fire a single round each time you pull the trigger. This is also true for semiautomatic rifles and semiautomatic shotguns: one trigger pull = one bullet. Compared to automatic weapons, the speed at which rounds of ammunition can be fired from semiautomatic weapons is remarkably different AND relies solely on the skill of the operator of that weapon. A military M4 carbine, which can fire in fully automatic mode, can fire up to 950 round per minute. Comparatively, the civilian version like the semiautomatic Bushmaster .223 can only fire up to 60 rounds per minute.

In reality, this rifle, the Bushmaster .223…

…fires one round with each trigger pull just like this rancher rifle:

Why is this important? Well, put simply, a semi automatic rifle (like the Bushmaster .223) is no more lethal than a shotgun, a semiautomatic handgun or a double-action revolver. The number of rounds you fire depends solely on how fast you can pull the trigger.

But wait, I thought guns like the Bushmaster .223 are called “AR rifles”. Doesn’t that mean they are assault rifles? No, that brings us to the next misnomer: the AR.

The most popular type of semiautomatic sporting rifles owned in the U.S. today are often described as AR’s or AR15’s. Most people believe that the AR stands for “assault rifle”. It does not. The AR is an abbreviation based on the manufacturer of the AR15 platform: ArmaLite. In fact, many of ArmaLite’s current line of products bare the letters AR in the name of the firearm – even for their handguns.

ArmaLite, Inc. is a firearms manufacturer that was started in the 1950’s. They originally designed the AR15 as a selective fire rifle for the United States Military. The design was sold to Colt who then used the design platform of the AR15 to manufacture M16 rifles for the U.S. Military. While the official name “AR-15” is a registered trademark of Colt, any rifle built on a platform similar to the original AR15 design is often referred to as an AR. Much like multiple brands and models of copiers are referred to as “Xerox” machines even though they may have very little in common with the original piece of equipment that bore that name.

The media, the president, and everyone else pushing for more laws on guns, however, would have you believe that a weapon like the Bushmaster .223 (referred to as an AR15) is more lethal than other firearms. It’s not. Why then, are so many asking for rifles like these to be banned? The sad truth: simply because of how it looks.

I know, you’ll say “lawmakers aren’t that crazy that they would ban a gun just because it looks like a military weapon.” No? Well, we’ve already looked that facts. Let’s recap:

Given those facts what, then, would the president be calling for a ban of? Well, if history is an indication, an assault weapons ban will include any firearm that looks like a military assault rifle. Don’t believe me? Again, let’s look at the facts.

The Federal Assault Weapons Ban (AWB) was enacted in 1993 and expired in 2004. In that bill, the definition of assault weapon was described as any semiautomatic firearm “that possess the cosmetic features of an assault rifle”. That’s right, “cosmetic” features. If it looks like an assault rifle, it must be an assault rifle and therefore must be more lethal than other firearms. This is what lawmakers and the media have been feeding us for 20 years.

Why would they do this? Well, for some, like Diane Feinstein, her hope is that this would be a first step to banning guns outright. She has publicly said this. I can’t speak for the media’s reasoning or others for that matter. Some will have you simply believe that so-called “assault weapons” – those that look like their military counterparts – are more lethal than other firearms. Well, it is true that a semiautomatic .223 rifle was used in both Colorado and Newtown. So if an assault weapons ban would make rifles like these illegal, won’t that protect people from gun violence? Let’s look at the numbers and find out.

First, the Colorado killer used three firearms that night: a .40 caliber semiautomatic pistol, a pump-action twelve gauge shotgun and a .223 rifle. Police revealed that the rifle magazine jammed so then he switched to using the shotgun and then the pistol. I haven’t been able to find forensic details describing how many total rounds were fired or which guns caused how many deaths. But, given that the rifle jammed, its hard to say that this was the deadliest weapon involved. In reality, the rifle used was the smallest caliber of the three. So perhaps it was the least lethal. We don’t know for sure.

So, what then will an assault weapons ban do to curb gun violence? Realistically, probably very little. That’s not just my opinion. Our own government, when evaluating the Assault Weapons Ban of 1993 when it expired in 2004, performed a study which concluded:

“Should it be renewed, the ban’s effects on gun violence are likely to be small at best and perhaps too small for reliable measurement. [Assault weapons] were rarely used in gun crimes even before the ban.”

So What’s the Real Reason Behind an Assault Weapons Ban?

If you’re a rational human being, you have to admit that all of this evidence shows that re-instating an “assault weapons” ban like the one enacted in 1993 is complete lunacy. There is nothing to suggest that there is any benefit from banning these so-called “assault weapons”. In reality, if you ban these rifles simply because they look like military weapons, then firearms manufacturers will just come up with new designs. That’s what happened after the 1993 assault weapons ban.

One such weapon that was designed specifically to replace those that were banned was the Hi-Point 995 carbine. This weapon was infamously used by Eric Harris in the Columbine killings in 1999. So did that assault weapons ban stop school shootings? No. Will this one? No.

Some will tell you that enacting an assault weapons ban would be the first step to outright violation of the Second Amendment. Perhaps that is true. I’m not going to encourage that mindset. It could be the truth, I won’t argue it’s potential. But, I think that, perhaps, this recent push for an assault weapon ban is much less about actually stopping mass killings or curbing gun violence or even overall gun control – instead it’s a simple, knee-jerk reaction to do something.

I believe the president may be more interested in his public image than he is in really keeping our kids safe. That’s not to say he may not attack our Second Amendment rights. He may, he may not – I certainly hope not. But, based on how little his Executive Orders will do and how ineffective an assault weapons ban would be. This move looks more like public relations than public safety.