Why Do We Aim for the “Bullseye”? 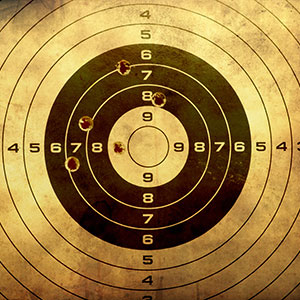 Now that Sons of Guns is gone, I’ve been searching the TV guide for new shows to educate and entertain me. One of my new favorite shows is on my new favorite channel – H2 – called America’s Secret Slang with host Zach Selwyn. As a history buff I’ve always had an interest in word etymology – you know, where our words come from. The most recent episode touched on some romantic and intimate words such as Austin Powers favorite “shag”. You probably won’t believe which American president first used that term to describe, ahem, gettin’ familiar Adam and Eve style. No, it wasn’t Bill Clinton. But, I digress.

I’ve been pleasantly suprised by the origins of many of the words and phrases we use everyday. Many words in today’s English language have roots in everything from racial slurs to the military, movie industry, travel and – yes firearms. I should clarify that, by English, I mean the American-English we use. I thought I’d share a few here related to – or inspired by – firearms and the military. Hopefully you’ll find this as interesting and informative as I did.

Why do we try to hit the “bullseye”?

Oddly enough, this one is actually pretty self-explanitory. Back in the days when the bow and arrow were the pinnacle of weapons technology, archers would test their skills by actually trying to shoot an arrow through the two eye sockets of a bull’s skull – hence they were aiming at the bull’s eye.

As weapons evolved, the term “bullseye” stayed around and is still what we say when we take aim today – whether with a bow and arrow or a AR-15.

Where did the “blank” come from when we shoot at “point blank range”?

Personally, I never even wondered where that term came from. When we shoot “point blank” we are shooting very close to our target. Why is that? I get the “point” part. We “point” our gun at a target. But what is the “blank” we are aiming at? This, too, comes from the days of archery. Anytime a projectile is fired, whether it’s an arrow, a bullet or a canon ball – the very second it hits the air it is being pulled down by gravity. So, when firing at a long distance, particularly with archery, you’re aim has to compensate for that – so you aim above the center of the target.

Apparently in the middles ages, the center of archery targets – or the bullseye – was colored white. The word for “white” in French is “blanc”. So, when archers were close enough to the target whereby they wouldn’t have to compensate for gravity, they would aim for the white in the target. In other words, they would “point” at the “blanc”. So, “point blanc” evolved to “point blank”.

How did tanks get their name?

While most of us are familiar with the steel beasts that first entered combat during World War I, why exactly is an armored track vehicle with a cannon on it called a “tank”? Well, to learn the answer to that question we have to turn back the pages of history an entire century to what was known as “The Great War”.

In the summer of 1914, more than a dozen nations began deploying armies throughout Europe in the opening months of World War I. Nations on both sides of the conflict cheered their young soldiers through city streets and sent them off to war. However, it wouldn’t take long before what was expected to be a glorious victory and show of power quickly turn into a quagmire of death in the trenches of France. Young men died by the thousands for mere yards of ground forcing generals, politicians and military strategists to eagerly search for some secret weapon that would turn the war in their favor.

While the idea of a mobile, armored platform had been discussed in the past, most of the top military brass didn’t think too much of its possibilities or even if such a weapon could be developed. In Britain, though, a young Winston Churchill – who was First Lord of the Admiralty at the time – thought the idea was worth exploring. He tasked a team of military minds to explore the possibilities of developing a weapon that was mobile, armored and could pack a punch.

Fearful that word of the project would reach enemy ears, a codename was needed to protect it. The team wanted to not only keep it quiet but wanted to confuse would be spies with misinformation. To that end, the team leaked information that suggested they were developing a mobile platform for carrying water on the battlefield and codenamed the project “tank” suggesting a large container of water. The codename, however, stuck even well after the first tank rolled onto the battlefield during the Battle of the Somme in September 1916.

So there you have it. A few phrases or words and where they came from.