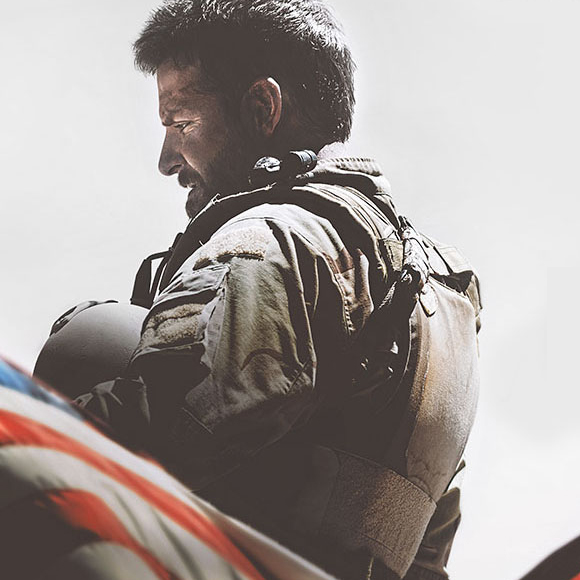 I will be the first to admit that I didn’t get out to see the movie American Sniper as soon as I would have liked. Directed by Clint Eastwood and starring Bradley Cooper and Sienna Miller, American Sniper opened wide in the United States on January 16, 2015. Grossing more than $340 million domestically and over a half billion dollars overseas to date, the film based on Chris Kyle’s book entitled “American Sniper” has been a hit both critically and financially.

Last weekend, I finally took an opportunity to see the film with two of my brothers. Before I share my thoughts about the movie itself, I think it’s important to share my thoughts about the people involved in the film first. I will say that when Chris Kyle first came into the public spotlight when his book premiered in 2012, I was quickly a fan of the man. Being a long time supporter of our military and a fan of the U.S. Navy specifically, Chris’ story resonated with me immediately. I have a deep respect and even a love for the man, his beliefs, his code of honor and the work he did during his four tours of Iraq as well as the work he did after coming home with his fellow veterans. 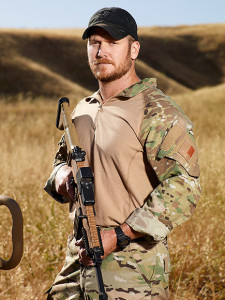 I think that, unlike a lot of people who have read the book or seen the movie American Sniper, I felt I had a fairly good understanding of who the person Chris Kyle was before seeing the film. I had seen Chris in interviews with Bill O’Reilly, Conan O’Brien and many others. From what I had seen and read about the man, I understood him to a be a humble man but a proud soldier. A man who felt he had an obligation to protect – his fellow soldiers, his family, Americans, innocent Iraqis and allies alike. Chris Kyle was, from what I could tell, a good man, a good soldier and in my opinion, an American hero. Without reading a single sentence of the book or seeing a preview of the movie American Sniper, I had a profound respect for Chris Kyle. In fact, two years ago when I saw the headline that Chris had been killed, I honestly wept at my desk reading the story. Chris’ death was a loss for our veterans, our military and indeed the entire United States of America.

All that being said, I also have a real respect for Bradley Cooper for not only having the desire and courage to bring Chris’ story to Hollywood, but also for the masterful job of portraying Chris in the film. I don’t know much about Bradley Cooper, but I understand it was a personal project for him to turn Chris’ book into a feature film and he wanted to tell the story as faithfully as he could. So, for that I respect him. I’m also a huge fan of Clint Eastwood – as an actor, a film-maker and for being one of the few conservatives left in Hollywood.

So, now to the movie, America Sniper. The film starts with a scene from Chris’ first tour in Iraq where he is on top of a building keeping watch on an American convoy below. A woman and child enter the road and the woman hands the child a Russian-made grenade and encourages him to walk towards the convoy. Chris zeros in his sights on the boy and the film flashes back to his childhood and a hunting trip he was on with his father. The short flashback gives an idea of a stern father teaching his two sons to be tough. The film flashes back to Iraq then winds back to Chris’ past, his recruitment to the Navy and his SEAL training.

The first act of the film quickly takes us through Chris’ life as a young man and his early days in the U.S. Navy. Included in this part of the story is a scene where he meets his wife Taya in a bar. While I’m not sure if the account is in any way factual, for me it was the highlight of the early part of the movie. The scene is playful and the chemistry between Bradley Cooper and Sienna Miller is palpable. It’s a clever and fun scene and allows us to see a light-hearted side of Chris that is nearly forgotten in the second half of the movie. Chris and Taya’s courtship plays a role in this portion of telling Chris’ story which ultimately leads to their wedding. It is at their wedding when Chris learns of his pending first deployment. 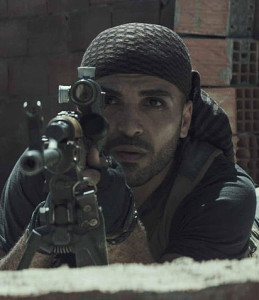 From there, the film goes back and forth from each tour in Iraq to back home again. As Chris’ skills improve as a sniper so his legend begins to build throughout both the U.S. military as well as the Iraqi people. The battle scenes are gripping and at times heart-stopping. The grit of that brutal war is portrayed very well providing an insight into the conflict that I really haven’t appreciated before. The brutality of the insurgency is also depicted quite graphically inducing moments when you really want to look away from the screen. Throughout each scene of the film the acting stands out above most else for me. Bradley Cooper not only does a masterful job of portraying Chris Kyle as he was in real life – he actually seems to become Chris. Cooper does a fantastic job with the accent, expressions and mannerisms of Chris Kyle that it really does feel like the real person is up there on the screen.

The movie is filled with lots of scenes pieced together to portray a man with a purpose and an almost unstoppable desire to see that purpose fulfilled. Chris Kyle is a protector and this aspect of him shines through in the film. It’s that purpose, however, that also seems to darken him as a man and cast a long shadow that he and his family seem unable to cope with. With each trip back home Chris seems more and more lost and unable to adjust to “normal” life. Some heavy conversations take place between he and Taya with her at one point begging him to become human again.

The final act of the film takes us through Chris losing fellow SEALs in combat and depicts a fictionalized version of his famous 2,100 yard killshot. The tension and chaos of Chris’ final tour is incredibly dramatic and in some ways felt a little too fictional and sensationalized for me. The final rooftop scene depicts a truly unsurvivable battle that is so chaotic it’s really hard to follow and its resolution seemed very contrived and unbelievable. Chris even appears to get shot just before escaping the enemy but that injury is never mentioned. Another part of this final battle scene that bothers me is that in the middle of it, Chris picks up the phone to call his wife and tell her that he’s ready to come home. For a guy who has been portrayed as selfless and finds purpose in protecing his fellow man, this action seems incredibly selfish and stupid. While Cooper uses this scene to let us finally see the previously rock-solid soldier finally show a crack and some real emotion, the scene didn’t connect with me emotionally at all as it seemed so out of place and out of character.

After his last tour Chris seems more distant and broken than before. One scene shows Chris losing it at a picnic when he snaps and appears ready to kill the family dog. I’m sure this is just a quick way of Eastwood demonstrating how out of touch Chris is after over a thousand days in-country. But, it was a terrifying scene and again felt a bit out of place. It’s clear at this point in the movie that Chris Kyle is no longer the “American Sniper”, but a broken vet who can’t seem to find purpose. The film does demonstrate well how much Chris desired to be over there protecting his fellow soldiers and that not being there seemed to be quite literally driving him crazy. His therapist suggests that he can still protect his fellow soldier but this time right here at home by helping his fellow vets cope with their own struggles. This option seems to be the right medicine for Chris as a few scenes of him working at the VA and with other veterans are tossed together before the end of the film.

Even at this point, however, Chris still seems disconnected from his family and more connected to the veterans. It isn’t until a few scenes at the very end when we finally see Chris smile again and he and his family appear to be together at last. It’s at that moment when Chris walks out the door on the day he died. This abrupt ending also bothered me, especially how Taya gives him a short “I’m so proud of you” speech on that last day when for three-quarters of the movie she seemed ready to leave him. It once again felt forced and unnatural.

Overall, I think the movie conveys the soldier-side of Chris Kyle well. His purpose is clear and he is well portrayed as a true leader and hero. But overall I felt as if the film was very disjointed and I was unable to connect with any of the characters at all. I fully expected to feel some real emotion during this movie but even in the end – with the beautiful scenes of his funeral procession and all of the flags waving along the streets of Texas – it felt more hollow than heart-wrenching. I really wanted to love this movie and in some ways I think I wanted it to make me cry but, unfortunately for me it was more of a stitched together work of some really fantastic scenes but not one really well told story.

That being said, American Sniper is still a movie worth seeing. Whether you know anything about Chris Kyle or not, I think every American should see this movie as I think it helps us to appreciate our veterans and those that protect us every day. Bradley Cooper’s performance was stellar – Oscar-worthy in all respects. Sienna Miller also nails the conflict and emotion that I’m sure many spouses of service members experience. All told, the acting is great from top to bottom. But there were some pieces and holes that never came together for me, so I’ve got to call this one good but not great. I have to say, in fact, that a short documentary by the History Channel entitled “The Real American Sniper” actually hit me more emotionally than did the two hour and 12 minute feature film.

American Sniper is the story of the most lethal sniper in American military history. Chris Kyle was a hero, a hardened warrior and yet still an everyman. This film may not be perfect, but I believe it does honor the hero it depicts.